It seems that every day another fixture of the music industry announces that their upcoming tour will be their last. 2018 has seen retirement announcements from a slew of great musicians. Performers from Elton John to Aretha Franklin to Slayer have decided to park their party buses and retire from touring, opting to make the shows on the current tours their final live performances.

However, for many musicians, retirement isn’t necessarily the end of the proverbial road. According to a study conducted by American Advisors Group (AAG) on the retirement habits of popular musicians, many performers spend more time touring during their “retirements” than during their careers. Guns’n’Roses, who “retired” in 1993, have spent 17 years performing since 2001. Likewise, The Doobie Brothers have been touring intermittently since 1993, despite many members’ retirements from touring following the band’s break-up in the ‘80s. And Elton John, who has already embarked on his 300+ show Farewell Yellow Brick Road tour, has been in “retirement” 39 years – almost 3 times as long as his pre-retirement career. 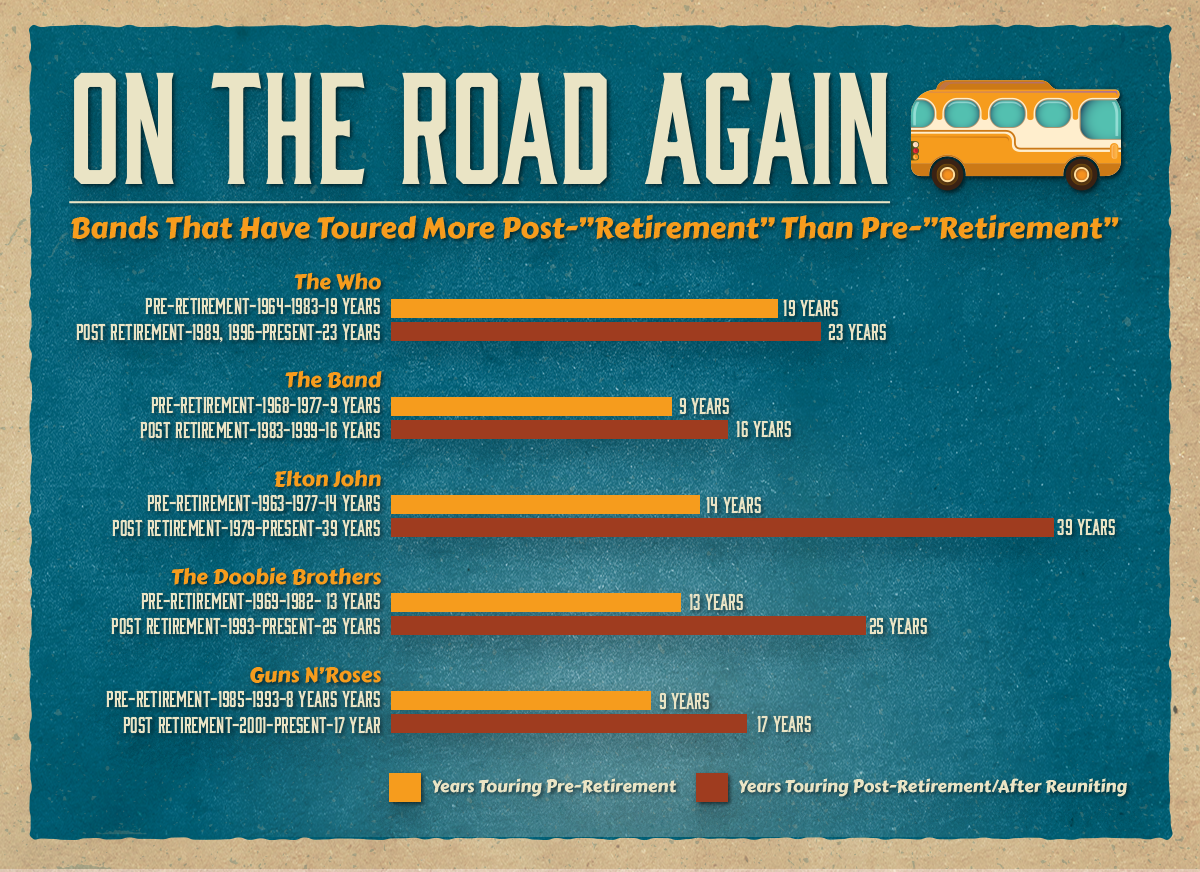 Farewell and post-retirement tours are incredibly common. Of the 16 bands AAG surveyed, retiring musicians played an average of 55.56 shows per retirement tour, with 32 percent of acts playing only a single farewell show. What’s more, many farewell tours generate incredible amounts of revenue. Tina Turner’s 2000 Twenty Four Seven tour made the artist $122.5 million, while Cher’s multi-leg Living Proof tour made the artist and Twitter personality $260 million during its run between 2002 and 2005. Elton John’s Farewell Yellow Brick Road tour is expected to generate $400 million for the artist before his final show in 2019. Considering the fact that some artists, like Barbra Streisand, make $350 or more per ticket sold on a farewell tour, it makes economic sense that many artists are performing in announcement of their departure from touring or well into their retirement.

Fans are always sad to see their favorite musicians depart from the concert circuit. Considering both the strain that touring puts on musicians and the ability of farewell tours to generate revenue, it is likely that fans will see musicians embark on more retirement tours as popular musicians age.